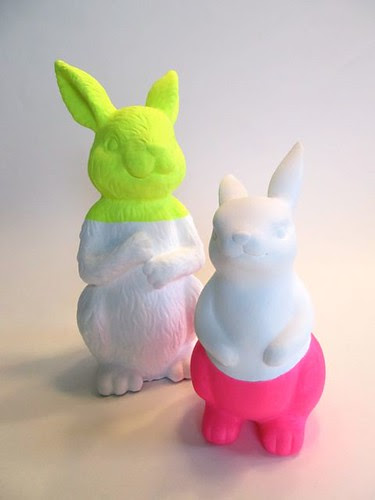 So I can lay my obsessive mind to rest for a bit since I was able to somewhat pull off my neon dip-dyed Easter plans! 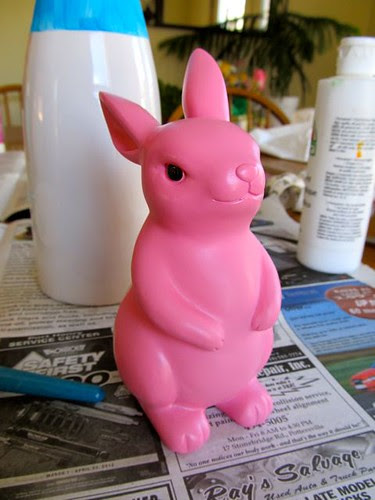 I had this vision of painted bunnies for the table, so I set out in search of bunny figurines.  I never imagined it would be so hard to find them with all the Easter stuff stores sell!!  After several stores, I ended up with this pink bunny, apparently the only one in the entire Target, and was skeptical I'd find more anywhere. 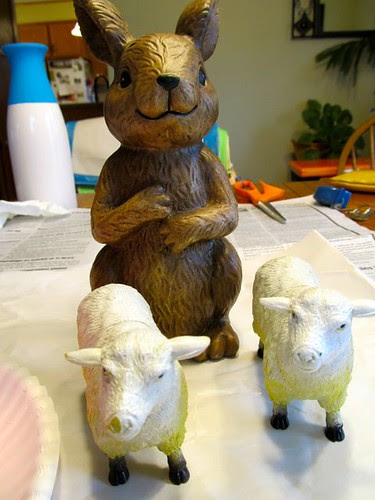 In my desperate search for bunny brethren, I found two sheep at the dollar store, and figured they would be as close as I could get to a bunny.  There were the perfect size, just what I had in mind; how come there aren't any little bunny toys?!  There were tons of dinosaurs however!!  You guys have no idea how close I came to having a dinosaur Easter!  (I'm not exaggerating, I was desperate.  I also giggled a little at the ironical implications of such a thing.)  Finally, in Walmart's garden section I found a second bunny, larger than my original idea, but I didn't care.  At least it was a frickin' bunny. 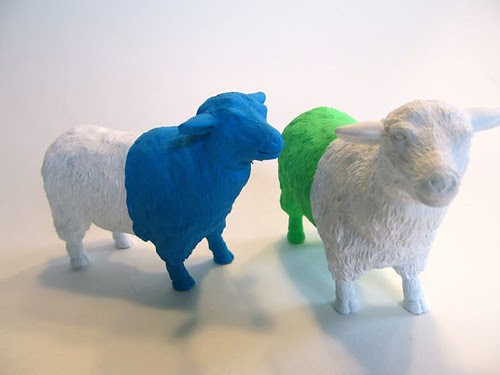 So anyways, I used acrylic paint on these guys.  I'm sure spray paint would have been faster, but I like the sense of control I have with a brush.  Also, for me, paint lasts way longer than spray paint, so I think it's a little more economical. 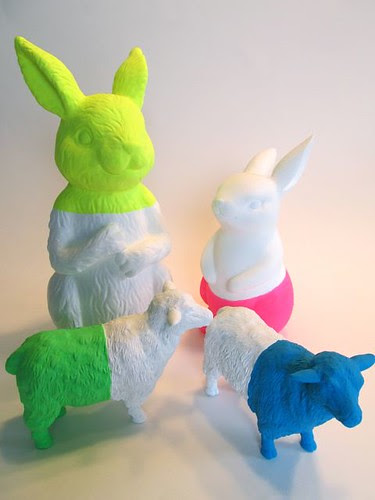 I love the three neon colors!!  I used a regular turquoise because I think it looks great with the neon colors and tones them down a bit.  I really like how these turned out; there's something about the bright white with the splash of color... but maybe that's just me! 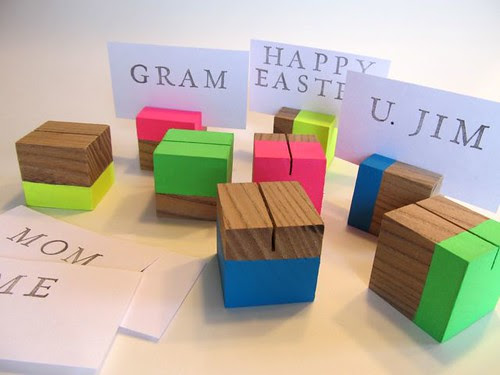 Inspired by this post on Design For Mankind, I made these place card holders!  While I was painting away on my animals in neon heaven, my dad cut up 1 1/4 inch squares out of leftover chestnut, and cut slots in them with the band saw.  I kept the wood "raw," and only painted part of the blocks, starting with two coats of white as a primer, and then several coats of color.  I love how they turned out, and figure I could use them as photo holders, and could always pull them out again for another dinner!

I stamped up some quick place cards, of course according to how everyone was related to me, for example, "Gram," "Uncle Jim," "Dad," etc...  And because I had done that I felt like I couldn't just stamp "Kate" for mine.  It was only logical to stamp "Me;" that and it was eleven o'clock at night... 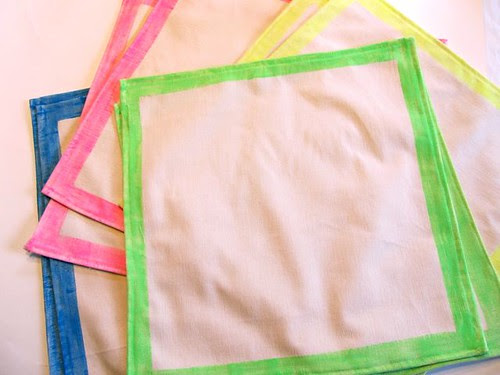 I also made napkins!!  Well, I should my mom and I made napkins, as I also put her to work for me!  After striking out in the stores for some already made fabric napkins in an off-white or beige color, I bought some twill to make my own.  I cut the fabric into 16 inch squares and my mom offered to hem the edges for me.  It's a good thing, because with my sewing skills, it probably would have taken me days!!  So once they were sewn, I used painters' tape to mark off about an inch border, and then lightly painted with my acrylic paint so as not to turn to make the fabric too stiff.  (I've read that adding a fabric medium to acrylic paint would also solve that problem, but I didn't have any, and they didn't end up stiff anyways.)  Painting lightly gave them a nice washed out look that I liked.  I could just pretend I planned it that way right? 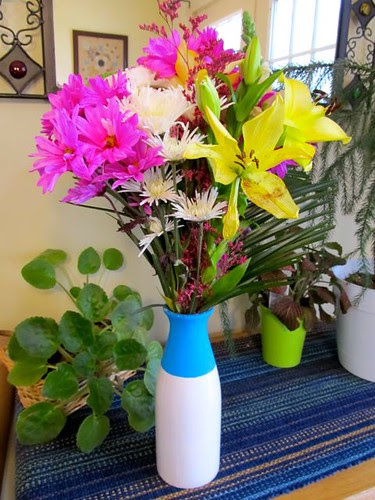 I also picked up a porcelain vase on sale for $2.50 at the craft store, so I painted the top with the turquoise acrylic paint.  I should have sealed it with my varnish because after putting the flowers in, the acrylic paint started to peel off...  Oh well, it still looked nice for Easter, and I figure I can just wash the paint off, and paint it again if I want. 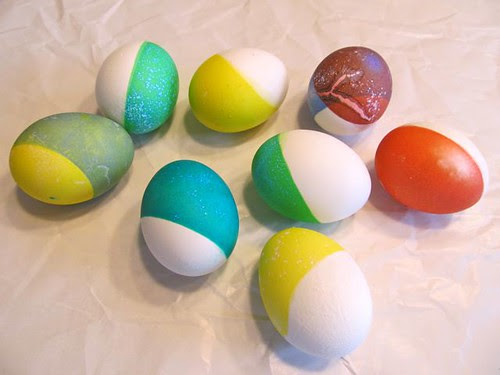 There was also a dream of dip-dyed eggs...  I thought I was so smart in coming up with the idea and realized people had already done it haha!  I saw these amazing eggs on oh joy! and tried to recreate it with what I had.  I couldn't spend a ridiculous amount of money on neon food coloring, so I used the traditional PAAS kit. 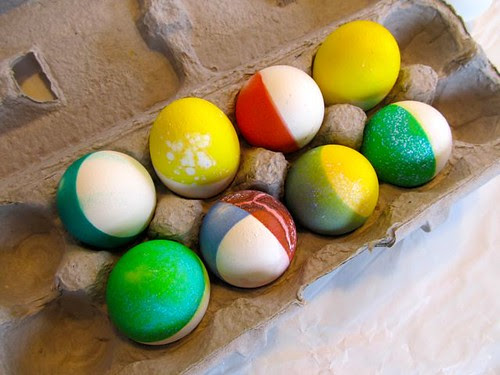 After getting it home I realized it didn't have all the colors I wanted.  So I attempted to mix colors with what it came with, and didn't really succeed.  The first egg I tried I dropped completely in the dye, so I just dunked it again in a second color once it dried.  I also got a strange speckled look, possibly from the dyes not mixing well with each other?  I don't know what happened, but I should have realized since food was involved it was bound be become a botched enterprise.  I'm cursed in the kitchen; every time I attempt to make something the only thing I end up with is a progression of comedic errors worthy of a story in a collection entitled "The Misadventures of Kate in the Kitchen."

Oh well, they still turned out pretty cool in their own way, and they will be perfect for cob salads! 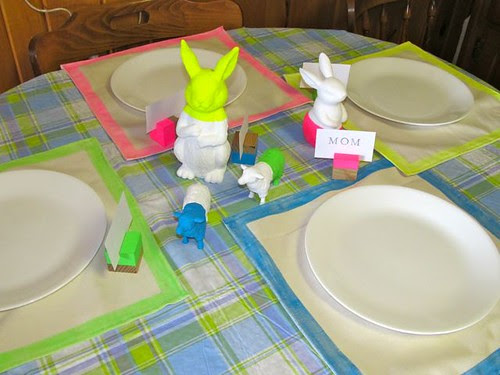 For Easter dinner, I packed up all my dip-dyed goodies and took them to my Gram's house.  During the table setting, the napkins turned into place mats, but I thought they looked pretty fun that way.  For dinner, we just slid the napkins out from under our plates to use.  I think it all turned out nicely and it seemed like everything was pretty well liked.  My cousin Robin, who has just started a blog, took some more pictures if you'd like to see at Saunter Forth Kicking.

I almost felt silly for spending so much time on something that was going to be used for one dinner, but I came to the conclusion that I needed something to make the dinner feel more special and more "official."  The weather has been so strange that it hasn't really felt like we are in the right month.  And maybe time has felt like it's been going by faster and faster and I just needed something concrete to say "this is Easter, and this is what I did for it."
Labels: easter neon sewing woodworking