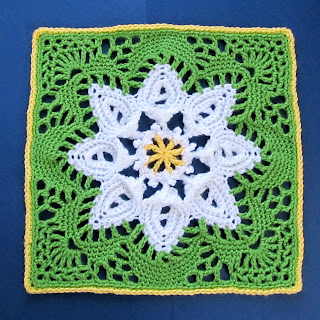 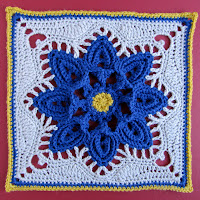 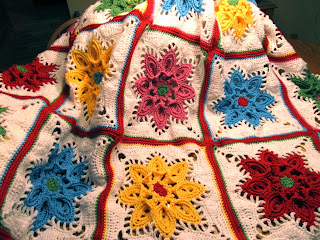 Comparing the two patterns, the Puritan Bedspread pattern is very close to the pattern I made this block and afghan from.  In fact, the "flower" part is EXACTLY the same.  The very center of the flower, and the square around the flower are slightly different.  I think I like the solid center of Design 988 better, but the surrounding square of the Puritan Bedspread pattern is much easier!  With Design 988, there were a lot more ends to sew in as you fastened off yarn and joined yarn again several times in the square, which also made the pattern a little harder to memorize.  The Puritan Bedspread pattern also didn't take as much pulling and tugging in the blocking phase.  After blocking it, it ended up about the same size as Design 988 which for me was about 14 inches. 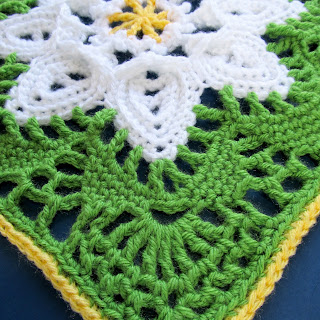 For those interested, here is what I used/changed for this block:
-  Worsted weight yarn (vanna's choice)
-  Size J hook
-  Started with magic ring instead of ch. 6
-  3rd Row- switched to second color
-  9th Row- switched to third color
-  16th Row-  switched back to first color 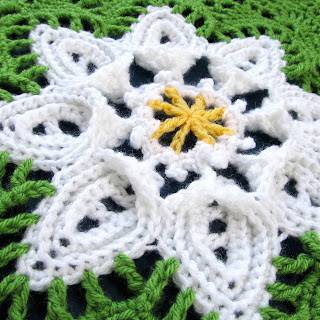 I really liked how much easier this pattern was.  It wasn't that Design 988 was hard, it just took a little bit longer, there were more ends to sew in, and blocking it was a bit more work.  Plus, I think this pattern has a much more interesting background.

(Because this block is so similar to my Forget-Me-Not block, and looks like a daisy, I thought I would name it something a little witty, like, He-Loves-Me-Not block.... but then that sounded a lot less witty and a lot more depressing. hahahaha!)
Labels: crochet scrapghan