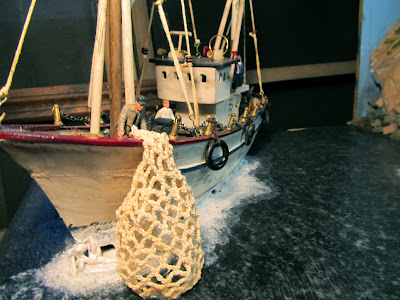 I had a great weekend with friends celebrating Nehill's (late) birthday and as a surprise, my (early) birthday!  There was a movie, frozen yogurt, lots of laughing, a light saber, and a little train table crafting time.

As for the crafting part of the weekend, my main task was crocheting the fishnet for this ship.  For those interested, I used size 10 crochet thread and a size 10 crochet hook.  Starting with a connected chain (forming the base that is glued down), I worked in a round and repeated [ch 5, sc 1] and started to decrease towards the top by omitting the ch 5 every few repeats.  It didn't turn out too bad!

But more interestingly, want to see how Nehill makes a tree?  He usually uses what's on hand, so these are the materials he happened to have this time.

See the crate on the pier?  Nehill made that on Sunday too by gluing pieces of popsicle sticks onto a small block, and then staining it. 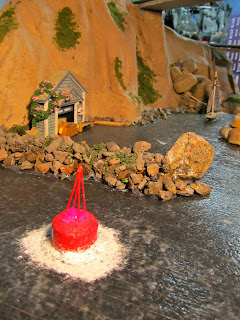 See the red buoy?  He painted a wine cork red and put a light in the middle.  That plastic red thing on the top?  He found it on the garage floor.  Pretty sweet.  You can make almost anything from anything!!

Since the last time I was there, Nehill got a lot of the electrical stuff hooked up.  Want to see?  These pictures don't do it justice, but you'll get the idea... 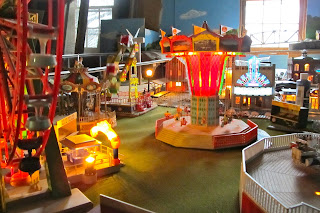 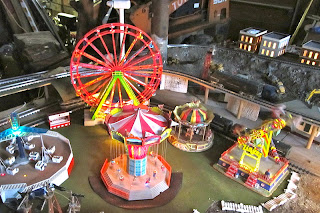 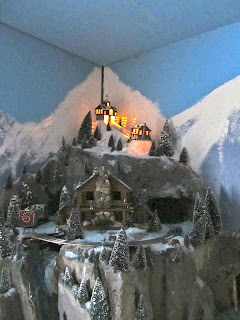 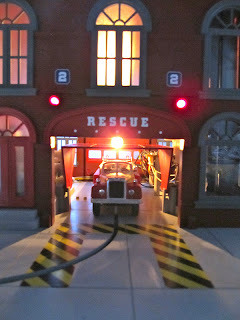 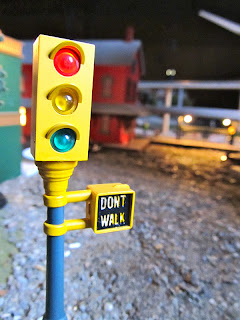 So it was a very fun weekend, and a good craft day (minus my elbow taking out a sailboat mast with a dance move... nothing some hot glue couldn't fix, but I still felt awful)!  It's probably a good thing we don't live closer because I'd want to help all the time (and probably break more stuff, haha), and then wouldn't get much else done!
Labels: train layout