When Your Lemonade Sucks... 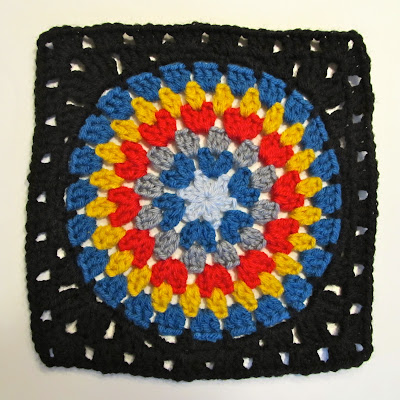 Recognize my next scrapghan square?  After everything I attempted today failed, I had to make at least one thing that didn't end with an expletive.  When all else fails, go back to what works!  So Squaring the Big Circle it is!


Do you ever have one of those days where nothing you do seems to work?  That was certainly today.  First I thought I would make an owl ornament.  I traced my owl onto some plywood, and used my scroll saw to cut it out.  My cutting job was a bit wonky, but I told myself not to panic; I could clean it up with the belt sander.  But I over sanded, and made it more wonky.  Frustrating.  Alright, let's try something different.

Next I had this idea to make a scrapghan square out of small triangles sewn together.  I had made a couple of cards in a similar manner, so maybe it would translate to crochet.  I spent quite a bit of time crocheting little triangles, and sewing them into strips to then sew together.  The strips looked good on their own, but after I sewed the first two strips together it turned a bit wonky.  I told myself not to panic; maybe the triangles would flatten out once I sew on another strip.  No so.  Instead of three strips of triangles, it looked like I tried to sew two lumpy circles together.  Epic fail.  Let's try something that will work!!!

I decided to make my Squaring the Big Circle square.  It apparently works seeing as how it has almost 4,000 pageviews, which is 1/3 of the pageviews of all of my pages put together!!  I checked its pattern page on Ravelry, and it has been "favorited" 500 times, with 32 projects posted.  Plus there are more projects out there by people who aren't on Ravelry.  That makes me so happy and proud!  I don't want it to sound like I'm bragging by any means, it is just the type of pick me up I needed to get me out of my creative slump!!

Today's lesson:  When life gives you lemons, and you make lemonade, and your lemonade totally sucks... get back in the kitchen and make whatever you're famous for!  You'll feel a heck of a lot better.  hahaha!!