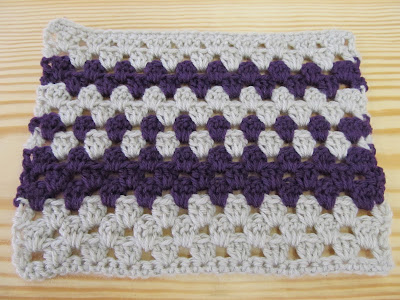 This block is adapted from block 76 in Jan Eaton's 200 Crochet Blocks.  I made my own stripe pattern after working with stripes in a stairs project with my dad.  Even though I followed the pattern, the block didn't exactly end up square.  I could have added more rows to make the block square, but I decided I liked the rectangle look; it more closely resembled the stair treads that inspired it.

My dad has asked for my opinions concerning pieces he's working on, but never before has he given me this much creative freedom.  He was asked to do a set of stairs for some friends, and he decided he wanted to do something a little special, something he had never done before.  He wanted to add some inlaid strips of mahogany into the stair treads and the bottom platform/tread, but he wanted to stray from his normal linear self, and make the stripes of mahogany a bit more random and "artsy."  This is where he handed over the design to me! 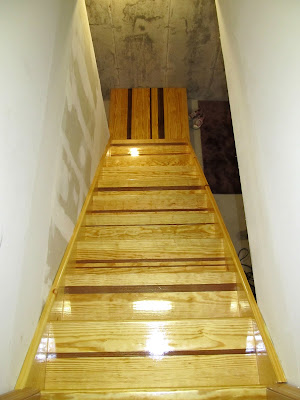 I don't think the pictures I'm going to show you do the stairs any justice!  I've played around with the levels trying to make pictures appear as true to life as possible, but the stairs go down into the basement where there isn't much natural light.  Plus, when I took the pictures it was a rainy day, so that didn't help!  So I apologize if the colors aren't consistent from picture to picture... I tried!! 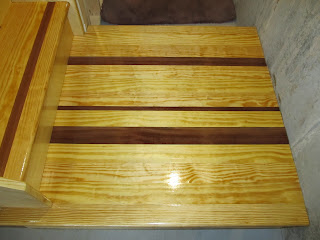 The first thing we designed was the platform, which is really the first step to then make your way up the stairs.  Dad had cut three different widths of mahogany, and after much playing around, we decided we liked this arrangement.  From here we wanted to carry the theme of our platform to the stairs on a smaller scale. 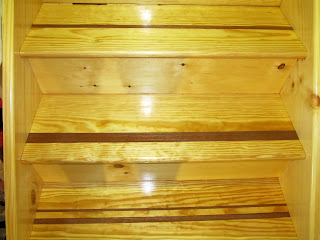 With three different width strips, which I believe were 1 1/2 in, 3/4 in, and 5/16 in, I designed the different treads and where the treads were to be placed.  I wanted to keep it simple so you weren't overwhelmed with stripes, and I wanted to keep the placement of the stripes a bit random.  It sounds like an oxymoron, trying to achieve randomness, but it's not easy!  I like to refer to this tricky process as creating "organized chaos." 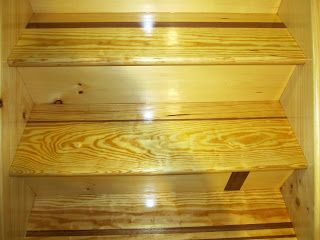 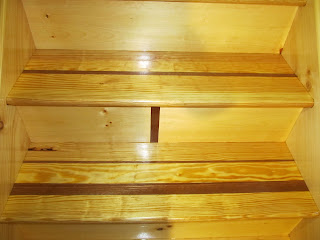 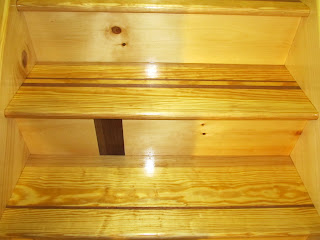 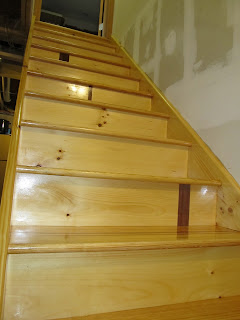 So then I thought we needed a way to tie in the platform to the rest of the stairs.  What about vertical stripes to match the direction of the stripes on the platform?  I figured carrying the stripes from the platform all the way up every single riser would have been too much (even if we had the mahogany to do it with) and would have created a crazy checkerboard pattern that might have freaked out your eyes, so what about three random risers!?  To tie them in with the platform, I lined up the same width stripes to the placement of the same stripes on the platform!  Make sense?  To further the idea of "organized chaos," when spacing these three risers amongst the rest, I spaced them similar to how we spaced the stripes from each other on the platform!  Probably nobody will realize these little details but us.... but I think it really ties everything together! 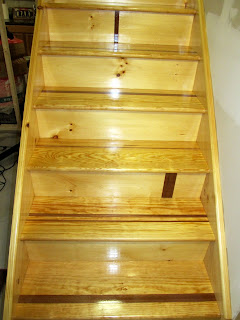 Unfortunately I don't have pictures of all the work that went into these...  My dad made everything by hand, the inlay work is tricky, and there was a ton of sanding involved both before and after installation.  We also put three coats of varnish on them, sanding in between coats. 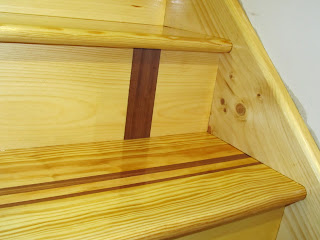 I think my favorite part of this project was installing the treads and risers, and seeing it all come together.  It was both exciting and nerve racking seeing my drawings come to life.  "I think it's looking awesome, but will they like it?!"  Scary!  The owners saw some of it while we were working on it and they seemed to like it, but they haven't yet seen it with the varnish.  The varnish really made the mahogany nice and dark, and really made it pop against the yellow pine!

I didn't mean to ramble so much, I just had so much fun working on these!  I hope they love them as much as I do!