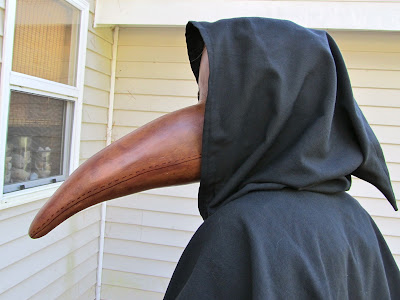 Know what this is a costume of?  Until my sister and I started working on this halloween costume for a special 11 year old, we had no idea that this costume is based on historical fact. 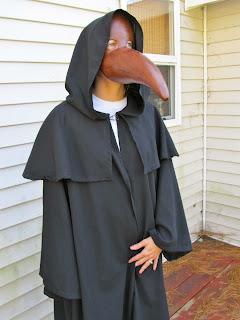 Did you guess "plague doctor?"  Plague doctors were used during plague epidemics like the Black Death Plague in the 14th century.  But it wasn't until the 17th century that they started wearing a beak like mask to help protect them from infection.  They would fill the beak with different scented things which supposedly protected them from the "bad air" that caused the disease.  The mask would also have glass eye openings for further protection from the outside air.  To protect his hands, the doctor would use a cane to examine the plague victim. 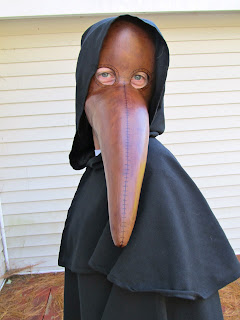 Alright, enough historical stuff.  But before we move on to the crafty stuff, I think it's interesting to the note that perhaps the things that we find most scary are not the things of fiction, but rather things that have strong factual roots in our history.  Imagine living during the time of the black plague, and seeing a plague doctor walking towards you!  Truly scary.  Moving on!! 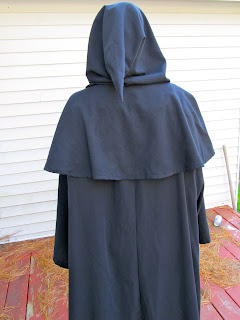 My sister made the awesome cape from this Simplicity pattern.  The fabric I think was a linen-cotton blend.  It turned out great and drapes beautifully! 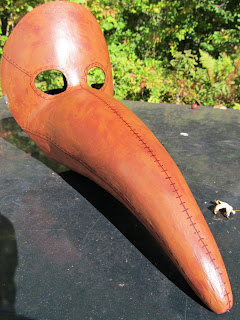 With the help of a great tutorial at creepypasta, I made the mask.  I started with a costume hockey mask, sculpted the beak from a styrofoam cone and glued it to the mask with some more foam.  Next I plastered the "beak," sanded the plaster once it dried, paper mached the entire mask, did another layer of plaster over the entire thing, sanded again to make it nice and smooth... and then it was ready to paint. 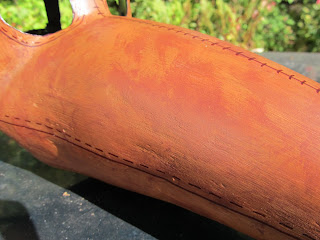 I wanted to give it a "leather" look, which I think I achieved.  I painted 3 coats of a lighter brown (Nutmeg brown to be precise), and then with a wadded up paper towel I applied a darker chocolate brown.  I pretty much made it up as I went along, dabbing here and there, wiping it on and off, and smearing it around until I was happy with it. 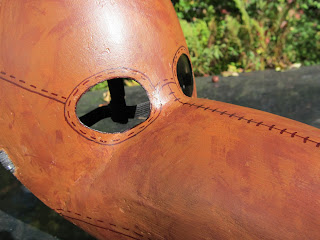 To make it more true to the real deal, I added stitches with a brown Sharpie to show where the leather pieces would have been stitched together to form the mask.  Hopefully I did this in a more subtle way so as not to make the mask look too fake and cheesey. 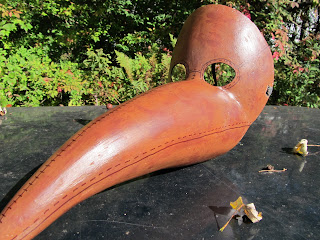 I also added a coat of matte Mod Podge to seal and protect the mask.  Lastly we added an additional piece of elastic that goes from the top of the mask, over the top of the head and down to the original elastic strap to handle the added weight of the beak.  I was so happy with the final result!  Best of all I learned a new method of crafting with the styrofoam, plaster and paper mache!  I was all "with this new skill, I could make anything!!!" hahaha  Ok, one last pose Gin! 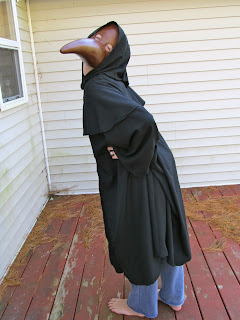 Frightening.  Well, after dropping it off at the post office we are now anxiously awaiting the recipient's reaction!  We hope he loves it as much as we did!

(On a completely unrelated note, I think I've made it so now anyone can post comments, not just people with a google account.)