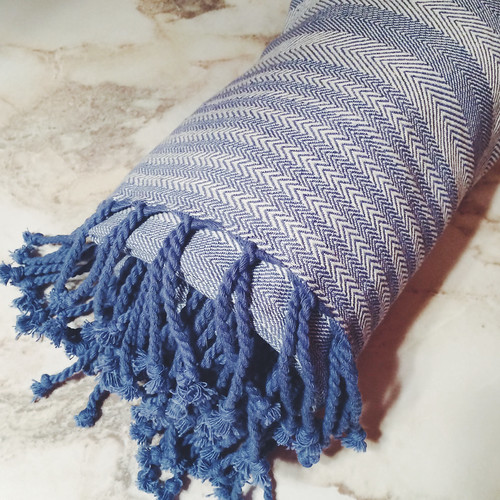 Any fan of Douglas Adams' The Hitchhiker's Guide to the Galaxy, knows that a towel "is about the most massively useful thing an interstellar hitch hiker can have." Ever since reading Hitchhiker's, I've held a certain respect for the towel and its practical and psychological value ("any man that can hitch the length and breadth of the Galaxy, rough it, slum it, struggle against terrible odds, win through and still know where his towel is, is clearly a man to be reckoned with.") but until just recently, I hadn't run across a towel that would be worthy of being carried around the galaxy by Arthur Dent. Enter, the Turkish style bath towel.


I'd been dying to try one after having read about them awhile ago, so I was really excited when I found one in the store! Have you guys used a Turkish style bath towel? They are lightweight, very absorbent and fast drying, not to mention just beautiful! They are also multi-functional. They can be used as a beach towel, bathing suit cover up, picnic blanket, light throw, table covering, or you can "wrap it round your head to ward off noxious fumes or avoid the gaze of the Ravenous Bugblatter Beast of Traal."

I was a little nervous that I would miss the cozy fluffiness of a regular towel, but the large size (mine is 40 inches by 70 inches) seems to make up for it! I read that the more it's used and washed the softer it gets as well. And it's so light! I could hardly feel it on my head when I wrapped my hair in it. But what really makes me smile about this towel is that it's different. I love anything that is a little out of the norm, making a simple everyday thing, like drying off after a shower, feel a little more special!

In conclusion, I'd highly recommend you trying out a Turkish style bath towel if you haven't already. I know what you might be thinking; "wow, it must be a really slow Sunday if Kate's posting about a towel... she's probably just talking up this towel for kicks and giggles." My response to that would be: are you willing to risk your potential after-shower-drying happiness on that assumption? Just think about that my friends.

In the meantime, I'll be dreaming about more Turkish towels, like these I found on Amazon, or this one or this one on Etsy...
Labels: Sunday Smiles