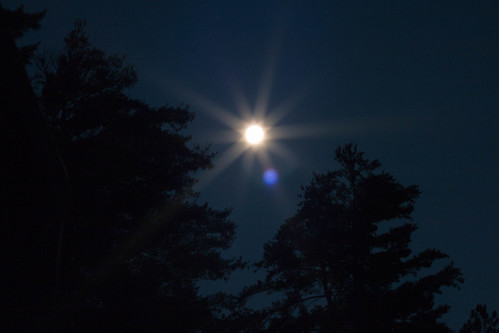 Did you guys go out and look at the supermoon Sunday night? I waited until about 10:30 that night to see it peek over the trees, and I set up my little tripod on the end of the dock and started taking pictures. I rarely shoot at night, so I just guessed and played around with the different settings and different lenses. It wasn't long before I got frustrated that I couldn't seem to get rid of the lens flares and halos around the moon. "That's not what the moon really looks like!" Giving up for the night, I figured it might be something I could remedy with some editing.

Turns out it wasn't something that could be remedied with various different tweaks. However, as I started thinking more about the supermoon and the excitement over it, I wondered if a good realistic shot really best suited the subject. Something perfectly true to life doesn't necessarily speak to the celebration and attention we're giving to something that is part of our everyday lives on this specific day. It's the out-of-the-ordinary that makes it feel so special!

The moon, which is always there, doesn't change size in actuality, obviously, it just appears a little bigger and a little brighter. So what's the big fuss? I think perhaps the supermoon speaks to a part of us that also sees it as just a little more magical and our deeply buried sense of wonder and imagination begins to stir. And I think that something so beautiful, which might otherwise get overlooked, unnoticed and dismissed as a norm, demands and deserves such an occasion to make us aware and grateful for such wonders that are at our disposal every second of every day, if we not only look, but truly see.

So I started to embrace the "worst" of my shots, and began accentuating the geometric rays of moonlight, letting my imagination wander... After all, it's not about what I looked at, it's about what I saw.
Labels: Photo-Tuesday