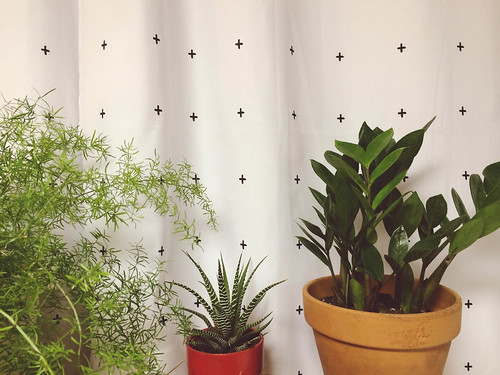 Wow, I can't believe it's Sunday again already! Where are the weeks going?! Anyways, on to the smiles! The picture above contains two things that have been making me smile. One, some of my plants. I'm afraid I may be turning into a crazy plant lady. I currently have 8 plants, an avocado pit I'm trying to grow, and some cilantro that I just bought but whose life span is looking questionable (although it has been pretty tasty). Apparently, plants are like potato chips; you can't have just one. (And with potato chips for me, it's always a case of eating almost the entire bag.) At the store I have to fight the compulsion to buy more by telling myself that I have to make sure I can keep the ones that I do have alive for awhile before thinking about getting more. With a rescue plant and the unluckiest cactus in the world, that may prove to be a little challenging...


The fern you can see in the picture on the left I think of as a rescue plant. It was on sale for half off at Walmart. It had some brown fern bits in it, and half of the plant had longer fern bits than the other half, as if only half of the plant got sunlight (which made the half off sale price look appropriate). It looked sad. So I'm attempting to nurse it back to health. After cutting out the brown bits and giving it a bigger pot, it seems to be fairly happy. I also have a little cactus which I'm desperately trying to keep alive as it has had quite the traumatic life. A friend gave my sister and I each a little cactus not too long ago, and within the first twenty minutes after they were gifted, my sister's cactus was partially eaten by a dog, and then repotted, only to be knocked off a railing by my butt, and repotted again. Both cacti had been left at our parents' house (as we have a history of failed cacti transport attempts in cars, but that's another story), until I decided, in my newly found plant craze, that they had to join the rest of my plant brigade. I placed them on the floor of my car very carefully, and being extremely cognizant of the fact that I've already been a guilty participant to a car related cacti death, I started driving down the driveway. What happens the second I take my slow turn out of the driveway? A cactus spills over. Which cactus was it? It was my sister's poor half-eaten-repotted-twice (-and-soon-to-be-three-times) cactus. I won't repeat what I said after that poor unlucky cactus took its third traumatic tumble. But suffice it to say that I learned my lesson, and will carefully pack any future traveling cacti passengers, possibly buckling them in to be extra safe. Ok, enough plant stories, (I've probably firmly cemented the "crazy plant lady" comment now), on to the second cause for smiles!

My new curtains! I plan on doing a separate little post on them, but for now I just want to talk about the fact that just opening them in the morning makes me smile. Does that sound strange? I really just love to start the day by letting the beautiful natural light in my room after waking up. This morning I was reading a post on Apartment Therapy called "5 Small Daily Practices That Add Up to a More Satisfying Home Life," and the first thing the post mentions is opening your curtains. I immediately was all "yes!" It's a great little post, with simple little things that, well, "add up to a more satisfying home life!" I also have found that making my bed every morning makes me so happy. I have found in the past that my mental state of mind is reflected in the state of my room. So, making the bed, something I had been guilty of not doing, or not doing well every morning, is a great little proactive way to deal with my mental messes and put me in the right state of mind. A nice clean looking room is much more inspiring to be in!

Is there something that you do every day that puts a smile on your face?
Labels: Sunday Smiles