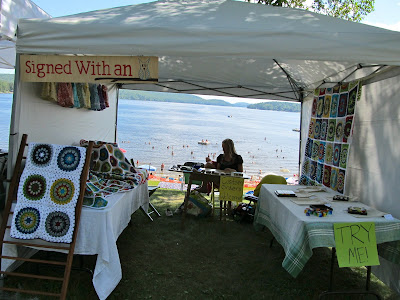 I did it, and to me that's the most important thing!  It couldn't have been a more beautiful day, and you can see from this photo (that I took later in the afternoon, so excuse the dishevelment) that my spot had a gorgeous view of the lake.

So how did I make out?  Well, I sold one of my block sets (my favorite, the quilt inspired one), and one crocheted rock (which may or may not have been a pity purchase, haha).  It exactly covered the cost of having a booth.  So I broke even; it could have been worse!  And the block set that I sold is going to be used as a therapy tool for someone who suffered a stroke.  The fact that something I made is going to be used to help someone made all the work that it took to set up for the craft fair worth it.

I also got to talk to several very nice, crafty ladies.  I think it's great to connect with people who also make things by hand, because there's a deeper understanding and appreciation for the art.  I probably was more excited to be able to share my blog and tutorial with these ladies after they showed an interest in my "Squaring the Big Circle" afghans so they could make it themselves, than I would have been if someone had bought one of them.  There's something much more exciting about inspiring creativeness in others and in the sharing of ideas with like minded people... but I digress.

So here are a few observations I made from the day:

1.  Kids knew exactly what to do with the blocks without any explanation.  They just got it.  Most adults not so much.  Unfortunately my computer battery died fairly early in the day, because my friend Nehill had quickly put together a little movie with a lot of pictures of the blocks while we my sister and I were putting together the tables (I had lots of nice help, and lots of friends kept me company throughout the day), that we put on repeat beside the blocks.  If I had time, I was planning on making little booklets to put with the sets of some possible designs.  Next time.  But here's the movie... thanks Nehill!! (You may recognize the first part of the movie.)


2.  The people at the craft fair in general didn't seem like they were there to buy.  It felt like a lot of people were going to the beach, saw the craft fair, and decided to look around.  Maybe it's just the economy, or maybe people were just looking for small things.  However, I got a lot of really nice and positive responses, which made me feel like I was having an art show.  "Really beautiful work!" or "these are so pretty!"  It was very rewarding.

3.  People seemed surprised that I was the one who had made my crafts.  I'm not sure as if there is a stereotype attached to crocheting that made people expect that whoever made the blankets had to be at least 70 years old and sport a rocking chair, or if it was that despite my 28 years of age I tend to look like a 16 year old to many people.  Either way I found it funny.

4.  I learned not to take anything personally, especially when someone walked by, poked their head in, perhaps crinkled their nose and kept walking.  People have different tastes.  People also have different ideas about how things should be priced! Here's one interaction with such a person:

Guy: "What are these?"
Me: "They're puzzle blocks.  You can rearrange all of the blocks and make different designs and patterns."
Guy: (cutting my previous sentence short) "How much are they?"
Me: "The smaller 4x4 sets are $40, and the larger 6x6 set is $60."
Guy: (I doubt I even got out "is $60" before..) "Oh," and he takes off with a speed somewhere between a speed walk and a sprint.

Ok, if the guy had hung around long enough I would have WANTED to really defend myself and my blocks with "Hey mister, do you know how much time I put into those blocks?  I cut, sanded, painted and sealed (several coats of paint and sealer in fact), all the blocks myself, and even put them in a hand made drawstring bag... and in all honesty, I think $40 dollars is a pretty frickin' good deal for all that!"

But I certainly am not that kind of person and decided instead to look at it more humorously, and give him the benefit of the doubt.  Maybe he had an extremely small amount of time to buy something with a very small amount of money, or else he would explode.  If I had known that ahead of time I could have helped out this guy in his extremely dire situation.  "Don't waste any more time here kind sir, you should move on to the next tent!  Go!  Go!  Go!  And Godspeed!"

Alright, this post is getting out of control.  If you have made it this far, I commend you.  In conclusion, the craft fair was certainly a learning experience.  It was fun, rewarding, funny and I'm proud of myself for doing it after years of wanting to.  After all, lots of kids had fun playing with my blocks even if their mean parents dragged them away from my tent or wouldn't buy the blocks for them.  To quote Vonnegut, "so it goes."
Labels: blocks craft fair crochet stop motion