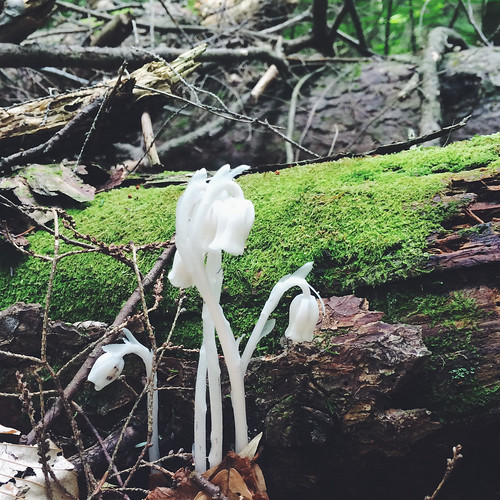 Happy Sunday! Did you all have a good week? Mine flew by, but I at least was able to squeeze in a great hike on Saturday. It's the same hike I've done several times, but I think I did it in record time. I must be getting in better shape!

I also learned something new. See the white plant above? I had never seen it before, and wondered if it was a kind of mushroom, as I saw lots of different mushrooms on the hike. After a quick search (google is pretty amazing isn't it?) of "white mushroom flower," I discovered that it wasn't a mushroom, but rather a sort of parasitic plant with an absence of chlorophyl. It's real name is Monotropa uniflora, but is more commonly known as "Indian pipe, " "ghost plant" or "corpse plant." It gets its nutrients from fungi and trees, and if you pick it (or when it gets old) it will turn black. I also read that when the flower parts bloom, the flowers point straight up, and will only stay opened for a week. Maybe I'll be lucky enough to catch it in bloom sometime!

Speaking of lucky to catch, I saw a beautiful deer almost at the very top of the hill I was hiking. It was really big and almost golden colored. (Any more description and it would sound like I was hallucinating or something.) I thought that if I had been a few minutes later getting up to that point I might not have spotted it at all!

Once I did get to the top I was rewarded with the discovery of some wild raspberry bushes. One was ripe for the picking, and it was delicious! With a little bit more time, there will be lots of yummy berries for the next time I feel like challenging myself again.

The whole hike was fantastic, and if a hike can take on a theme, it would be that of Timing. Perhaps I could even say that everything is happening with perfect timing, and with lots of exciting things to look forward to! I'll smile to that.
Labels: Sunday Smiles